BREAKING NEWS
Home Breaking News A cloudburst in the Binsar hill of Chamoli caused havoc, many houses, shops and vehicles buried under debris 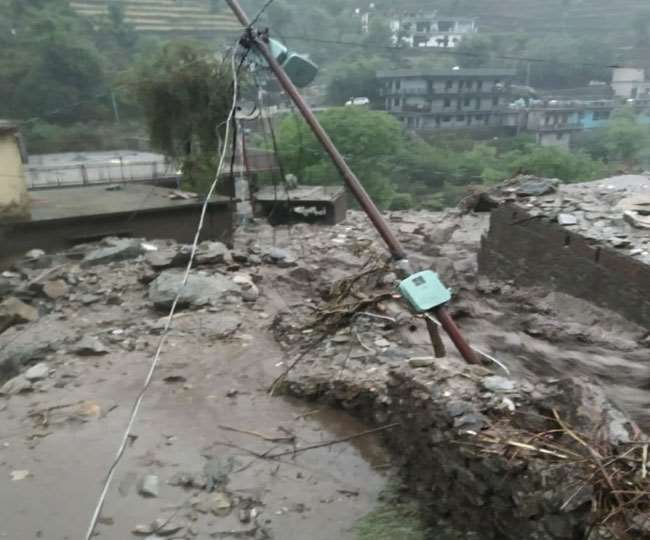 A cloudburst in the Binsar hill of Chamoli caused havoc, many houses, shops and vehicles buried under debris

Dehradun. After Chamba in Himachal Pradesh, the cloud has now burst in Chamoli district of Uttarakhand. This led to debris entering homes and shops in the Ghat Bazaar. As soon as the debris arrived, there was chaos in Ghat Bazaar. The local residents somehow managed to save their lives by running here and there. After the information, the team of Revenue Police, Regular Police and SDRF reached the spot and rescued four people including two children trapped in the houses along with the local residents. At the same time, snowfall continues in Kedarnath, Badrinath and Hemkund. According to the Meteorological Department, heavy rains and hailstorms are expected at Dehradun, Haridwar, Tehri, Pauri, Almora, Nainital, Champawat, Bageshwar, Pithoragarh and Udham Singh Nagar in the next three days. At the same time, celestial lightning can also fall in the mountainous areas. Apart from this, winds can also run at a speed of 40 km per hour in the plains. According to the weather center, weather patterns are expected to change in Uttarakhand till Friday. At the same time, CM Trivendra Rawat spoke to the District Magistrate regarding the incident.

In the late evening in Gedre near Banoli, the location on the Tilwara-Mayali motorway in Kejkholi area of ​​Rudraprayag, water and debris were filled in five residential houses. The fields have also been washed away. The drinking water line of the village has also been damaged. On receipt of the information of the surge, outpost in-charge Jakholi Sub-Inspector Lalit Mohan Bhatt has reached the spot along with the police force. There is no loss of life or property in this incident. At the same time, the Tilwara-Mayali road has been disrupted, debris being removed.

The weather also changed color in Doon and surrounding areas. Strong winds blew in between the encampments of black clouds and showers also fell in many places. Trees and electric poles have been reported to have fallen due to fires in Vikasnagar. Whereas, in Mussoorie, about two hours of freezing rain has returned to cold.

In Kumaon, it also rained as a rain storm. Strong rain in Almora collapsed the security wall of the residential complex at Chaughanpata in the district panchayat. Due to this, 12 members of three families living in the district panchayat building were imprisoned in the rooms for about an hour. After informing the administration, the policemen reached the spot and evacuated everyone. At the same time, Kapkot motorway remained closed for hours at Horali in Arag, Balighat, Duganakuri, due to debris from the hill in Bageshwar.