BREAKING NEWS
Home Breaking News No one will starve during the Corona curfew, CM Yogi directed to open community eatery in every district 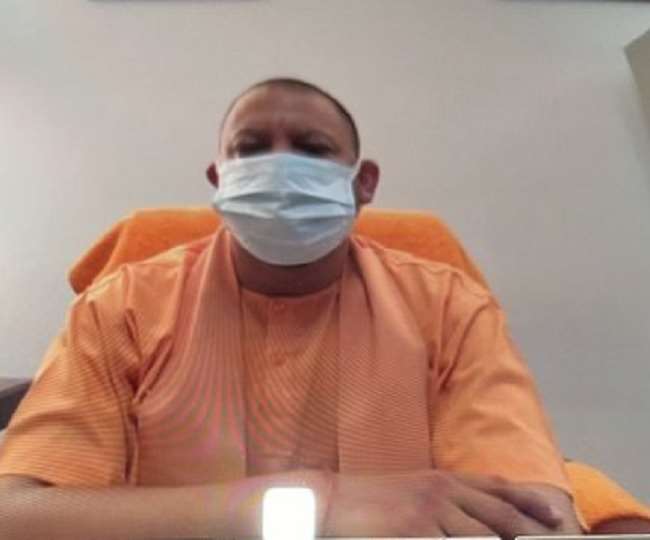 No one will starve during the Corona curfew, CM Yogi directed to open community eatery in every district

Lucknow. After the second wave of the global pandemic Corona virus infection became extremely active in Uttar Pradesh, Chief Minister Yogi Adityanath reviewed with Team-9 on Tuesday in order to reduce its impact and benefit the infected people. Later in the meeting, he directed the DMs as well as the Chief Medical Officers in the districts to be dynamic.

No one will go hungry during the corona curfew: He said that due to partial corona curfew, no laborers, hawkers, street vendors, daily laborers etc. should have food problems. CM directed to open community eateries in every district. The Chief Minister said that in such a situation, there is a need to operate community eateries. Necessary efforts should be made in this regard from the level of Commissioner of Agricultural Production. Along with this, the management of food etc. in industrial units should be made as per the requirement. It should be ensured that no person in the state is disturbed due to lack of food.

All higher education institutions will be closed till 15, online classes will not be there: CM Yogi Adityanath has also directed to close all higher educational institutions of the state like state universities, private universities and degree colleges by May 15. During this time all online classes will also be postponed. Earlier, on May 3, the government has declared a lockdown in the state till seven in the morning on May 6. During this time also, for the supply of essential commodities, it has been decided to issue e-pass once as well as last year.

Daily monitoring of Integrated Kovid Command Center: CM Yogi Adityanath said that Integrated Kovid Command Center (ICCC) is the backbone of Kovid management in every district. In all the districts of the state including Lucknow, ICCC personnel should give proper information to every infected and their family members. During this time, keep behavior sensitive. All DMs and CDOs must visit here every day and inspect the command center. Their daily meeting should be here. There is a need to further improve the teleconsultation facility for Kovid and Non Kovid patients in the districts.

No hospital complaints were found: The Chief Minister said that in some districts of the state, complaints of disorder have been received in some hospitals. District CMOs should ensure that senior doctors in Kovid hospitals keep visiting at regular intervals. In all private and government Kovid hospitals, the responsibility of a person should be fixed that he should give the latest information about the health of the patient to his family at least once every day. This system should be implemented effectively. In this situation of disaster, patients and their families should be treated with full sensitivity. With a view to strengthening the Kovid related system, the sector magistrate system has been implemented in the districts of the state. Sector magistrates make frequent visits to your area. Outside the hospital, these people keep visiting, help people. Keep a close watch on small and big activities. Provide all necessary help to every needy in accordance with government policies. This system should be implemented effectively. The discharge policy decided by the government for Kovid patients should be implemented effectively.

Regular communication with people living in home isolation: He said that most of the people suffering from Kovid infection have become healthy while staying in home isolation with proper medical consultation. In such a situation, there are very few who need to be admitted to the hospital. Ensure timely availability of medical kits to those undergoing DM / CMO home isolation. In the event of negligence, their big accountability will be decided from the governance level. With this, the ICCC and CM Helpline communicate with such infected people every day. There is also a need to further improve the teleconsultation regime for home isolation patients.

Mustaid Ho Ambulance Service: CM Yogi Adityanath said that ambulances have been arranged in all districts for Kovid and non Kovid patients. 50% of the 108 service ambulance is reserved for Kovid. Similarly, dead bodies have also been installed. The funeral procession should be made free with all due respect. There is a need for continuous monitoring of this system related to public interest. An officer of special secretary level should be appointed for this task.

Advisory Panel of Health Experts to be activated soon: CM Yogi Adityanath said that an advisory panel of health experts is being prepared at the state level for effective control and necessary strategy on Kovid. This panel will consult the state level team-9 from time to time. Along with this, all Kovid will be in constant contact with the Principals of Hospital In-charge / Medical College. Will continue to guide them. Consultation of health experts will be useful in formulating strategy. In view of the state of Kovid infection, health facilities are being increased in the state. Medical education, health department as well as private hospitals have also been activated for treatment of Kovid patients. The need is to increase the number of beds. We have to double the current capacity of beds in all districts. Medical education should be ensured at the Ministerial level.

Chain breaking is very important: The Chief Minister said that the government is constantly taking necessary steps to break the chain of corona virus infection. As of now, the partial corona curfew is in effect until six in the morning at six in the morning. Essential and compulsory services should be continued continuously during this period. Drugs, vegetables, grocery shops, industrial units etc. should be continuously operated. There should not be any unnecessary crowd anywhere.

Districts to be named oxygen refiller: He said that in all districts one oxygen refiller should be designated to supply home isolation patients. Oxygen must be made available to the people under treatment in home isolation. This system should be implemented effectively in all the districts. If a patient’s family is trying for cylinder refilling, it should be helped. There should not be any complaint of any type of harassment from the police. Additional Chief Secretary, Home should ensure necessary action in this regard. All necessary efforts are being made to improve the supply of oxygen in the state. Yesterday, 788 metric tonnes of oxygen has been distributed in the state. As of now, there has been a reduction in unnecessary consumption based on the preliminary report of the oxygen audit. The daily details of demand, supply and consumption of every district should be made available to the Chief Minister’s Office. The closed oxygen plant in Ayodhya is being revived. Sugarcane Development Department and Excise Department are making special efforts in the direction of oxygen generation through sugar mills and distilleries in 50-50 bedded CHCs in 34 districts. Supplies are also being provided directly from MSME units by connecting them to hospitals. Proposals for setting up oxygen plants in 61 districts have been sent to the Government of India. Plant installation work is going on with PM Cares in 14 districts. The work of setting up a new oxygen plant should be completed expeditiously. It should be reviewed every day.

Campaign in villages from tomorrow: To protect the villages from Kovid infection, a special Kovid Testing Campaign is starting from May 5. The Health Department should complete all the necessary preparations, including increase in the number of test kits, RRT, etc. in connection with this massive campaign.