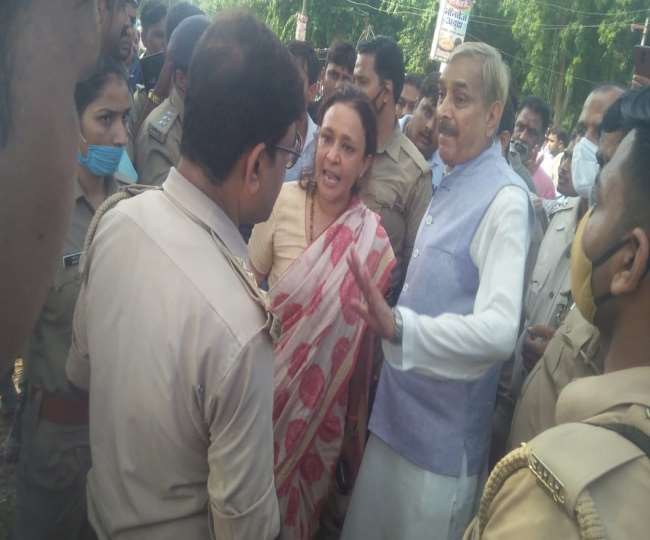 Congress supporters and BJP leaders clashed in Pratapgarh, supporters of both clashed

Leaders clash in Pratapgarh: BJP MP Sangamlal Gupta and Congress leader Pramod Tiwari clashed at Garib Kalyan Mela. There was a fierce fight between the supporters of both. During this, the MP was also manhandled and his clothes were torn. The MP’s car was also vandalized by pelting stones. MPs were injured.

The security personnel somehow pulled him out of the venue. There was also a scuffle with Pramod Tiwari in the riot that lasted for an hour. In this chaos, the mobile phone of MLA Aradhana Mishra (Mona) went missing. Many supporters of BJP and Congress were injured in this fight.

Police chased both the sides and deployed the force of three police stations on the block. The program was postponed due to the ruckus. BJP MPs Sangamlal Gupta and Vinod Sonkar along with party officials blocked the Lucknow-Varanasi highway demanding the FIR late in the evening.

After this, FIR has been registered in Lalganj Kotwali against Congress leader Pramod Tiwari, Congress MLA from Rampurkhas Aradhana Mishra Mona against 27 nominated and 50 unknowns under various sections including murderous attack, rioting. Deputy CM Keshav Prasad Maurya also tweeted regarding this matter and said that the culprits will not be spared.

Garib Kalyan Mela was organized in Sangipur Block Auditorium on Saturday. According to the protocol issued in this, MP Sangamlal Gupta was to reach there as the chief guest at one o’clock in the afternoon but he arrived late. Meanwhile, Congress leader and former MP Pramod Tiwari and his daughter Rampurkhas MLA Aradhana Mishra (Mona) reached the venue at around 2 pm.

There was a scuffle with Pramod Tiwari and Aradhana Mishra’s mobile phone went missing. The fight caused a stampede in the auditorium. Everyone ran out for their lives. After this no one could see who beat whom in the auditorium. When MP Sangamlal Gupta came out of the auditorium in torn clothes limping amidst the chaos, the supporters tried to get him out of there. On this his car was also vandalized. With bricks and stones in hand, people made his convoy run for a long distance. Apart from assaulting himself, the MP has also accused an inspector of being beaten up.