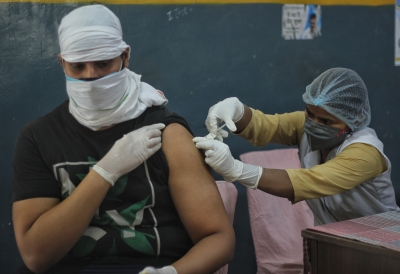 Journalists and their families will be vaccinated to protect from Corona

Lucknow. Chief Minister Yogi Adityanath has directed Corona vaccination on preference of all media personnel in UP during a review meeting with Team-9.

Like the front warrior in the Battle of Corona, the Chief Minister has taken the biggest decision by the government so far for the safety of UP journalists who are responsible for reporting on ground zero. There are a large number of journalists and freelancers working in newspapers, electronic media as well as web portals in the state. There is no obligation of journalists on hard duty and time during work. In such a situation, the Yogi government has instructed journalists and their families to apply the vaccine to protect them from the corona. On the direction of the Chief Minister, the top officials have started the process of vaccination of journalists on priority basis and the creation of a separate vaccination center at a fast pace.

The Yogi government is now going to give the benefit of the welfare scheme of the Center to help the journalists. Now the benefit of this scheme will be recognized by the unrecognized and freelancers too The eligibility of the scheme should be recognized by the Government of India or the Government of any State and Union Territory. If not recognized and they have been associated with print, electronic or web based services for at least five years, then they will also come under the purview of this scheme. Additional Chief Secretary Information Navneet Sehgal said that on the death of a journalist, there is a provision to provide financial assistance of Rs. 5 lakh to his dependents. In case of permanent disability, Rs. 05 lakh to journalist, Rs. 3 lakh in case of serious illness like cancer, renal failure, by-pass, open heart surgery, angioplasty, brain haemorrhage and paralysis and in hospital for treatment due to any serious accident. There is a provision of giving Rs 02 lakhs on recruitment.