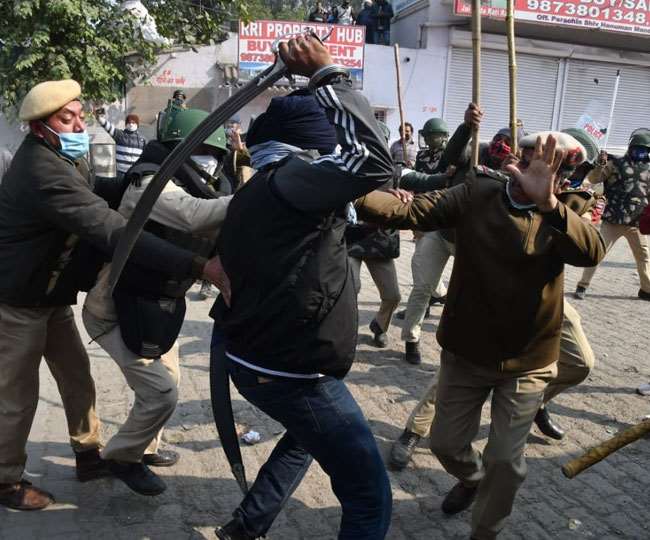 New Delhi, Ghaziabad, Sonipat. The agitation of farmers once again caused a ruckus on Friday. The incident on 26 January was not even cold that once again the incident of the sword wielding a policeman on the Singhu border has brought the peasant movement into question. However, the gathering of farmers on the Ghazipur border has started growing again. Due to this the police have to retreat.

In the midst of the peasant movement, there was a ruckus on the Singhu border on Friday. Stoning took place between local people and farmers. During this, Alipur SHO was also attacked with a sword. The police has arrested 44 people in this case. These include those accused of sword killing the Alipur SHO. At the same time, agitating peasant leaders protesting against agricultural laws said that attempts to weaken the movement have failed. The farmer has joined the movement with double strength, giving a befitting reply to all the conspiracies from Ghazipur to Singhu Border. Farmer leaders, while speaking to reporters on Friday evening, announced that January 30 would be celebrated as Sadbhavna Day and on this day all the farmer leaders would go on hunger strike. He has urged farmer leaders across the country to join this hunger strike.

What is CRM? Why use it? Sales of companies increased by 38% using Salesforce CRM. Learn how

While talking to journalists on the Kundli Border, Dr. Darshan Pal, Balbir Singh Rajewal, Amarjit Singh, Shiv Kumar Kakka, Jagjit Singh Dallewal, Yudhbir Singh etc. jointly said that the strength with which BKU leader Rakesh Tikait countered the handicap of the government , The government would have seen the result. Many times more farmers have gathered there than before and the same situation is also with the horoscope border. Therefore, the government should desist from such antics and abandon the stubbornness and withdraw all three agricultural laws.

Government’s fury to shut down the Internet

Farmer leader Dr. Darshanpal said that shutting down the internet shows the government’s disillusionment. The movement cannot be suppressed by such petty actions. The effect of this is that apart from various districts of Haryana, a large number of farmers from Mohali, Ludhiana are reaching the border. He said that the government should immediately restore internet service, otherwise farmers will not be averse to agitation against it. On the question of the arrival of political parties on the Ghazipur border, Yudhveer Singh said that all political parties have their own agenda, but we do not call them nor give them a platform.

The national general secretary of Bhakiyu (Bhanu) left the organization

National General Secretary Kuldeep Pandey has resigned from the organization after the Bharatiya Kisan Union (Bhanu) withdrew from the peasant movement. He called the national president’s decision to quit the movement a cowardly decision. Meeting with supporters and farmers in village Garhi, Kuldeep Pandey said that today the farmers’ movement needs strength, while the national president Bhanu Pratap Singh has taken a cowardly decision to separate himself from the movement. Rakesh Tikait has continued the fight of farmers, he is the son of a farmer. Kuldeep Pandey said that he would soon form a separate farmers’ association and traveled to Delhi with his supporters. He told that by calling the video, he has informed the national president about his decision.