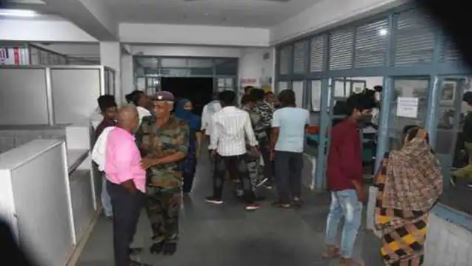 Woman dies after being shot in Siddharthnagar, police are accused

Siddharthnagar. A 60-year-old woman named Roshni, a resident of Tola Islamnagar of Kodragrant under Siddharthnagar Sadar police station area, died late on Saturday night. The relatives allege that 15 to 20 policemen came home late in the night. When the son of the deceased started taking Abdul Rehman without giving any reason, the woman opposed it. After this the police opened fire. There is tension in the entire area after the incident. The police have camped in the village and no person is allowed to enter the village.

Allegation: When asked the reason for taking the son, the police fired

Asked the reason for taking the son, it is alleged that the angry police opened fire. She took the woman’s back to the right. The woman died immediately. Relatives took her to the emergency ward of the medical college. Dr Shailendra Kumar, the doctor on duty declared him brought dead. He has informed the police about the incident.

Police camped in the village

The police have camped in the village. No one is allowed to go out. All roads leading to the village have been sealed.

This is also being discussed

Some people say that the police had arrested four people a few days ago. The police went to raid again in this connection. When there was a protest, someone opened fire. Atikur Rahman, the husband of the deceased, says that despite protests, the police have gone with his son.

superintendent of police did not pick up the phone