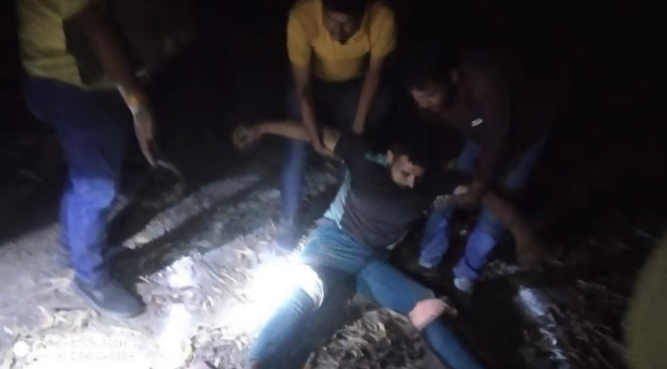 Police and miscreants encounter, one miscreant injured due to bullet

Ayodhya. The police, which was investigating the incident of robbery from the constable, had an encounter with the criminals on Saturday night. One robber was injured in police firing, while his two other associates escaped. One constable was also injured in the firing of miscreants. The injured miscreant has been arrested. The search is on for the absconding miscreants. A bike, pistol and cartridges have been recovered from the possession of the arrested accused.

On Friday, three miscreants looted a rifle and a bike from the constable Bhaskar on the Tarun-Haiderganj road. In this case, along with Haiderganj police, the Crime Branch was also engaged in the investigation. When three youths on two bikes were stopped near Katra village on Pachhiana road from Takmaniganj bridge on Saturday night, they tried to escape. When the siege was done, the youths started firing on the police team.

In the police firing, a youth got injured and fell, while two of his accomplices escaped. The name of the arrested accused is Akash Dubey, who is a resident of Purab Patti of Haiderganj. Accused Akash Dubey is the son of Rakesh Dubey, the head of Purab Patti village. The absconding miscreants include Brijesh Tiwari and Aman Maurya, residents of Haiderganj. The bike recovered from Akash’s possession belongs to Rakshi Bhaskar.

In the firing from the miscreants, constable Krishna Kumar Yadav has got bullet in the left hand. Police station in-charge Haiderganj Rajesh Mishra told that the three had formed their gang together. These people have also gone to jail from Sultanpur under the Arms Act. Efforts are on to arrest the absconding accused.