BREAKING NEWS
Home Breaking News Survey of the first day completed in Gyanvapi, videography in the basements, claim of plaintiff – evidence with us 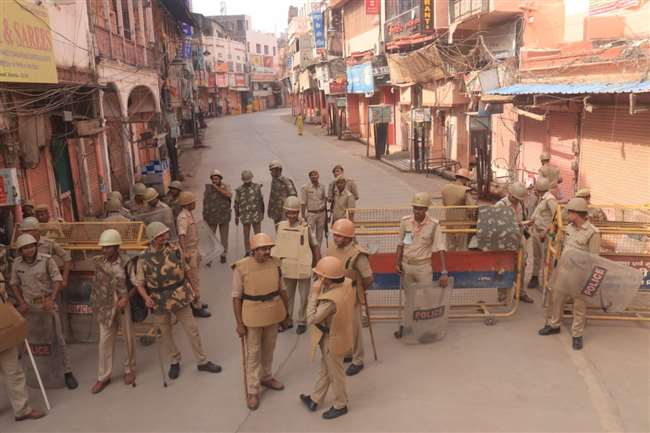 Survey of the first day completed in Gyanvapi, videography in the basements, claim of plaintiff – evidence with us

Varanasi. In the Gyanvapi Shringar Gauri case, the district administration has made strict arrangements since Saturday morning so that the commission proceedings could start from its scheduled time. In Varanasi, everyone has been stopped by barricading about a kilometer before the Gyanvapi Parishad. All vehicles coming from Godauliya and Maidagin were stopped by the police from coming towards the campus. At the same time, those who came to Baba’s court were also thoroughly investigated. At the same time, the proceedings of the first day were completed at 12 noon. Now the remaining proceedings will be completed tomorrow, Sunday. According to the administration, till now 50 percent of the survey work has been done.

By 8 o’clock in the morning, usually the entire team had entered the premises. Whereas the team of administrative officers included in the team had also arrived in the premises by nine in the morning. After this, with the consent of both the parties, one area survey was started. At the same time, according to preliminary information, a cellar has been opened in the Gyanvapi mosque, there was also unconfirmed information about a poisonous snake being found in it, which also came to the notice of the forest department and snake charmers to catch it. By noon, the team visited the respective areas in the campus and took stock of them and also videographed the concerned. District Magistrate Kaushal Raj Sharma said that action has been taken as per the decision of the court, remaining proceedings will be completed tomorrow. The entire proceedings are being kept confidential as per the directions of the court.

Survey will also be done on Sunday: According to administrative sources, a total of 52 members of the plaintiff-respondent side, including the Advocate Commissioner, entered the mosque premises. At the same time, due to security reasons, the mobiles of all the people of the team were deposited by the security team outside before entering the mosque. During this, the members also had an argument with the security squads. However, after persuading the rest of the people, people also deposited their mobiles. The survey of the basement of the western gate of Gyanvapi Masjid was completed by 12 noon on Saturday. Now the remaining areas and basement will be surveyed again on Sunday.

Plaintiff and Respondent: Raees Ahmed, advocate for Anjuman Inaztiya Masajid Committee, said that the proceedings of the commission were partially (about 50 percent) completed in a cordial atmosphere. Rest of the proceedings will be completed tomorrow. Everyone got full cooperation. Advocates Sudhir Tripathi and Subhash Nandan Chaturvedi for the plaintiffs say that there was full cooperation from all the parties. Neither side created any obstruction. For the smooth conduct of the proceedings, proper arrangements were made by the administration from security to spot lights, scavengers etc.

Closer view of the walls: In the presence of the administrative officials, the team closely observed the walls of the mosque complex and also closely observed the style of construction and captured the evidence on camera. Due to the darkness in the basement, electric lighting was arranged and the team members entered the damp and foul-smelling basement one by one in the premises. The team also observed, examined and collected evidence from the interior design and archaic style. During this, due to the tight security arrangements, the mosque premises were completely evacuated and it was ensured that no outsiders were present in the premises. While the entire surrounding area remained sealed, those who came close were returned after being instructed after questioning.

Action started late on the first day: According to administrative sources, first of all, the current situation inside was inquired by opening the locks lying in the cellars. After this, videography was also done in the presence of Advocate Commissioner in the presence of both the parties. At the same time, the DGP and the Chief Secretary are also constantly taking stock of the commissioner’s action regarding the security arrangements. The proceedings of the Advocate Commissioner began at 9 am on Friday. In this regard, necessary documents were provided to all the parties and security was tightened in the premises with the administration asking for the keys of the locks of the premises a day earlier. In the morning it was ensured that no other person was present in the premises. After eight o’clock in the morning with all the parties, strictness was started by the District Police for the proceedings of the Advocate Commissioner.

Security has been tightened: Arrangements have been made to ensure that there is no pedestrian movement or movement of vehicles on this road. Apart from this, heavy PAC has also been deployed on the streets. Paramilitary forces have been deployed along with the local police and PAC along with the police force. At present, the head of Vishwa Vedic Sanatan Sangh Jitendra Singh Bisen and four of the five women litigants, Manju Vyas, Sita Sahu, Rekha Pathak and Lakshmi Devi, are present here. Barricading has been done at gate number one and heavy force has been imposed. Barricading has been done near Chowk police station. Only the one whose name is in the police list can go in front of the barricading. At the same time, tremendous security arrangements have been made from Chowk to Bansphat.

Four hours of action on Saturday: The team constituted by the court looked closely at the cellars and its different parts in the premises after nine o’clock in the morning. All were videographed from multiple angles. The team has examined different parts of the basement one by one. According to sources, the team has first collected evidence around the grill and barricading on the ground floor. On the orders of the court, special cameras and special lighting have been arranged for videography of the premises. Earlier, at eight o’clock in the morning, the investigation team entered the Gyanvapi campus from Gate No.-4 and with the consent of both the parties, the team started the investigation. On the other hand, due to lack of electricity in the closed basement for years and it was very dark and weather, the team reached with a big torch with battery.

Confirming the investigation, roof top security forces were deployed on the surrounding houses and terraces only at 7 in the morning in terms of security. At the same time, for darshan and worship in Kashi Vishwanath temple, the believers were made to enter from gate number-1, while gate number four near Gyanvapi was completely closed for outsiders. By 9 am on Saturday, all the people involved in the order had reached the premises and till 12 noon the investigation was done as per the order. Officials have given information about the action for a total of four hours.

Said Advocate Commissioner: While talking about this whole episode, Jitendra Singh Bisen said that the commission proceedings will start today. The proceedings were stopped twice. But, today there is full confidence that the action will be completed. We have got time to act for three days. Efforts will be made to complete maximum work today and even after tomorrow being Sunday, the action will be taken forward. The proceedings will continue on Monday as the report has to be submitted on the 17th ie Tuesday. But, if the need arises, the action is not completed, then after completing the proceedings on the 17th also after taking permission from the court, the report will be filed.