BREAKING NEWS
Home Breaking News There was no talk of Akhilesh! Chandra Shekhar Azad released the list of his candidates, will contest on 33 seats 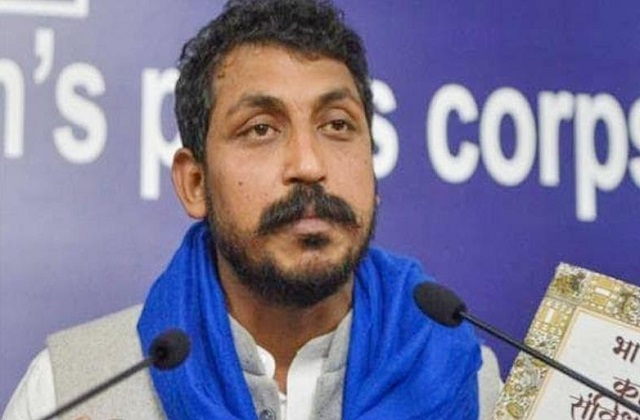 There was no talk of Akhilesh! Chandra Shekhar Azad released the list of his candidates, will contest on 33 seats

Lucknow. The Azad Samaj Party of Chandrashekhar, the founder of Bhim Army, eager to enter the field of active politics in Uttar Pradesh for a long time, will now contest the assembly elections alone. Chandrashekhar, the founder of Bhim Aami, was preparing to contest the Uttar Pradesh assembly elections along with Om Prakash Rajbhar and Owaisi. Meanwhile, he also saw little hope from the Samajwadi Party. When things did not work out with the Samajwadi Party, Chandrashekhar, who called Akhilesh Yadav anti-Dalit, started trying to go to the Congress. If there is no success even there, now he alone will field his party’s candidate on 403 seats.

Chandrashekhar, the founder of Bhim Army and president of Azad Samaj Party, who has made good inroads among Dalit youth of western Uttar Pradesh, has announced to enter the fray single-handedly. He has blamed SP chief Akhilesh Yadav for this. Chandrashekhar said that I had a talk with Akhilesh Yadav on 25 seats. Akhilesh was ready before seeing my fight with BJP. They know that my fight is with BJP and RSS. Now I don’t know what is in their mind. When they refused to give 25 seats, we will go to the field on our own in Uttar Pradesh. Will contest elections on his own in Uttar Pradesh. He said that we are fighting the battle of change in Uttar Pradesh.

Do you cheat akhilesh yadav

The founder of Bhim Army even called Samajwadi Party chief Akhilesh Yadav a retaliatory. He said that Akhilesh Yadav reverses his words, he cheats. Akhilesh had talks with me on 25 seats. I did not bring out the closed room thing, but now he knows. Chandrashekhar said that there has been a deceit, will take revenge from the SP-RLD alliance.

Refusal to field his candidate against Swami Prasad Maurya

Azad Samaj Party chief Chandrashekhar refused to field his candidate against Swami Prasad Maurya. He said that from where Maurya ji will fight, we will not field a candidate. He said that my fight is with BJP and RSS. I have been trying to fight them for two years. Chandrashekhar said that today the poor will not be able to encourage them to fight someone’s battle. We are young, we want change. We will go to the polls by releasing our list. We are fighting a big battle of change in the state.

We will be strong in 33 seats, will be on the third and fourth number, big parties

Chandrashekhar said that we are on 33 seats including Nakud, Rampur, Maniharan, Saharanpur Dehat, Muzaffarnagar City, Hapur, Agra South, Chandauli, Jakhania, Sirathu, Ballia, Mubarakpur, Hastinapur, Etmatapur, Khurja, Meerut Cantt, Tiruva, Noida Gangoh. We are strong. Without taking the name of Congress, he said that we claim that the big parties which are on arrogance will be at number three-four in all these places. My fight is for honesty.