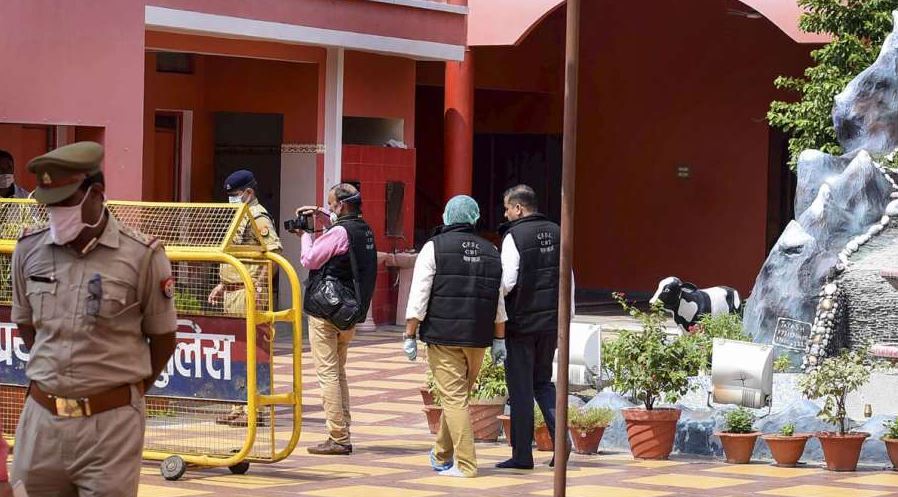 The Central Bureau of Investigation (CBI) replayed the suicide scene at the Baghambari Math where the body of Mahant Narendra Giri, president of Akhil Bharatiya Akhara Parishad, was found on September 20. Experts from the Central Forensic Science Laboratory (CFSL) were also accompanying the CBI team. CBI officials also questioned the driver of Balbir Giri and Mahant Narendra Giri and conducted detailed questioning sessions with other disciples who broke open the door of Giri’s room that day. The exercise ended late Sunday evening.

A dummy weighing 85 kg equal to the weight of the deceased Mahant was hung on the same ceiling fan and the disciples were asked to recreate the whole sequence by cutting the nylon rope and bringing the body down. The entire process was videographed. Forensic experts also measured the length, width and height of the room.

An official said the height of the room was checked and the length of rope required to reach the ceiling fan was checked. The scene of the incident was recreated and the entire proceedings were videographed. The driver was asked whether he took the monk out of the monastery or whether he was asked to meet someone on September 20. The CFSL team also met the doctors who conducted the post-mortem.

A 20-member CBI team from the Delhi headquarters, which started the investigation on Saturday, is staying at the Police Lines guest house and will be camping in Prayagraj for about 10 days. One of the longest inquiries was that of the cook who had prepared the food that day in the monastery.

The CBI team interrogated the disciples of Bablu, Sumit and Dhananjay, known as Sewadars, separately. The team is also looking for the origin of sweet bags and empty cans from a famous shop in Alwar, Rajasthan, which were found on the table of the room of the guest house, where Mahant was found dead.