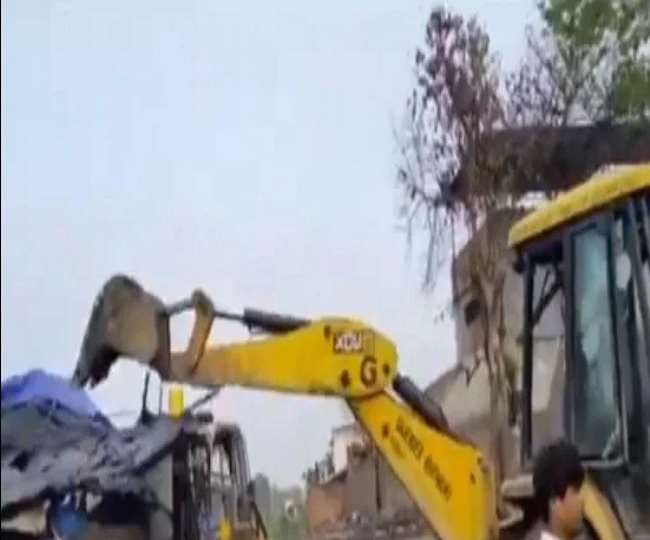 The RWA appealed to the Delhi Police to remove the illegal settlement of Rohingya Muslims but no action was taken. The Yogi Adityanath government of UP has taken major action against Rohingya Muslims living illegally in front of Madanpur Khadar crematorium in Delhi. The Yogi Adityanath government of Uttar Pradesh has also vacated large land in Madanpur Khadar area of ​​Delhi. The Rohingya camp built on this land has been demolished by a bulldozer. Rohingya Muslims were living illegally for a long time in front of Delhi’s Madanpur Khadar crematorium. Rohingya Muslims had settled illegal settlement on the land of UP Irrigation Department. All government facilities were being provided here from Delhi. In these camps, ration material was also being provided by the Delhi government and Okhla MLA Amanatullah Khan during the lockdown. Earlier, the central government itself had said in the Supreme Court that Rohingya Muslims are a threat to India’s security, and the government wants to drive them out of the country. Illegal Rohingya camps were set up on 2.10 hectares of land belonging to the Irrigation Department of Uttar Pradesh, which were razed by bulldozers.

In the Yogi Adityanath government, Jal Shakti Minister Dr. Mahendra Singh has also tweeted a video of this action of his government. The minister wrote, Yogi’s bulldozer started again in Delhi, Yogi government’s big action in Delhi. According to the information, more big action will be taken soon under the encroachment removal campaign.

In the Madanpur Khadar area of ​​Delhi, the Uttar Pradesh government took action by running a bulldozer from 4 o’clock in the morning. About 2.10 hectares of land was illegally occupied here, which has now been made encroachment free. The Uttar Pradesh government is continuously demolishing illegal constructions in the state. Many of these illegal constructions belong to the mafia and miscreants. This action has been seen in many places in the state for some time. In Delhi, the Uttar Pradesh Irrigation Department has lands in Okhla, Jasola, Madanpur Khadar, Aali, Saidabad, Jaitpur, Molarvand and Khureji Khas.